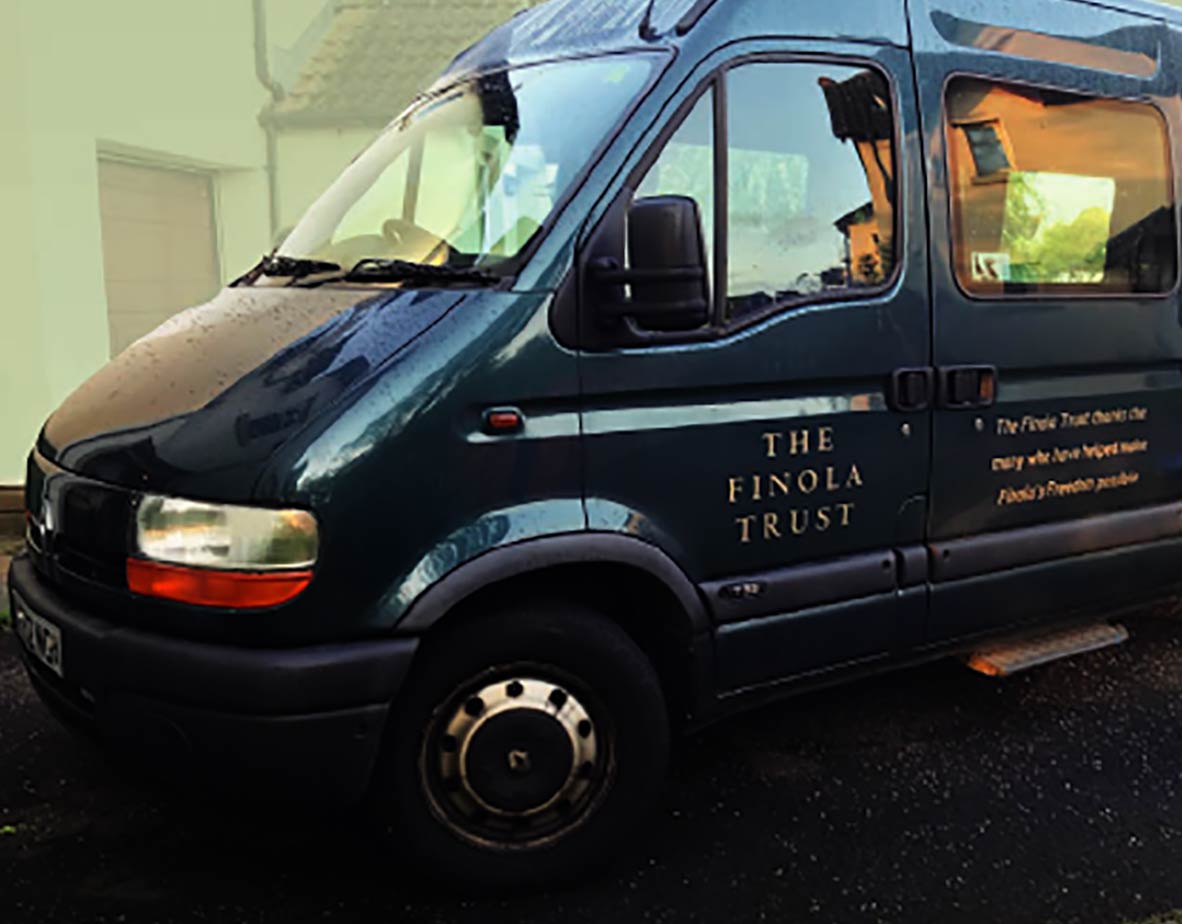 The Finola Trust Van is in its final year

Reaching for the sky

The Finola Trust Van is in its final year

HAVING TO LEARN THE HARD WAY

Having to learn the hard way

Finola’s dream is to have an independent future and for her to achieve this she has to experience it by attending a specialised residential college.  SADLY there are NO SPECIALISED colleges in Scotland at all and funding is very much a post code lottery as to whether you receive funding from your local authority. Therefore mammoth costs stands in her way.

Portland College, Nr Nottingham, England www.portland.ac.uk assessed Finola back in Nov 2008.  Magically with a lot of very hard work from a great many people we managed to raise her first years fees 3 weeks to her start date September 2009; year two funded was secured July 2010.  A HUGE thank you is owed to so very many.

Why are we having to fundraise?

Currently there is sadly NO PROVISION for children like Finola for specialised residential further education courses in Scotland.
If you live in England or Wales then any student with disabilities who meets certain criteria have been entitled to FREE FURTHER EDUCATION BETWEEN THE AGES OF 16 – 25 yrs however owing to the Living and Skills Council changes this year funding is becoming increasingly more difficult.

The Students Awards Agency for Scotland – has advised that there would be NO FUNDING for Finola as she does not fit the criteria for disabled students. The criteria states you have to be studying a higher diploma or degree  (click to view)

If you live in Scotland complex needs further education is the responsibility of each Local Authority with no ringfencing of budgets and, equal opportunitities provision for all up to the discretion of each Local Authority.  In certain parts of Scotland (postcode lottery) families are sometimes asked to source huge portions of the fees by either fundraising / applying to Trusts or using their own savings if they have any.

There is no consistency across the Local Authorities nor within a Local Authority itself it seems as to how much funding they provide. We have learnt recently however that some young people in Scotland have been very fortunate to be fully funded by specific Local Authorities to study at specialised colleges in England.  There have only been 2 young people from the whole of Scotland attending Portland College in the past 7 years, and yet Portland has a total of 300 student places per annum.  Finola is now the only student from Scotland attending Portland college.

Did you know that there there was a SCOTTISH PUBLIC PETITION WITH THE PUBLIC PETITIONS COMMITTEE JUST ON THIS SUBJECT?
Closed Petitions – Petition PE1180

Petition by Tom and Josie Wallace calling on the Scottish Parliament to urge the Scottish Government to ensure that students with complex needs are supported in achieving further education placements and that appropriate  funding mechanisms are provided to enable such placements to be taken up.

Unfortunately this was closed last summer owing to lack of response.

S3M-08084 Malcolm Chisholm (Edinburgh North and Leith) (Scottish Labour): Congratulations to Finola Education Trust That the Parliament recognises Leith teenager, Finola Forman, who has cerebral palsy, has chosen a specialist residential further education course requiring her to travel to Nottingham; congratulates the Finola Education Trust on raising £30,000 towards the second year of the three year course; notes that this brings the trust’s contribution for the first two years to £66,300, in addition to contributions by the City of Edinburgh Council; congratulates Finola on raising £3,500 by selling her own artwork; notes that, as part of Contact a Family Scotland’s Brill-Art exhibition, Finola’s painting of Edinburgh Castle will be on display in the garden lobby on 8, 9 and 10 March 2011; acknowledges the support of many others in promoting the campaign, and regrets that teenagers, such as Finola, have to rely on extensive fundraising to fulfil such choices.

Congratulations to the Finola Education Trust
That the Parliament recognises that the Leith teenager, Finola Forman, who suffers from cerebral palsy, has chosen to attend a specialist residential further education course and that such facilities are available only in England; congratulates the Finola Education Trust on raising the £36,000 additional money that was required for the first year of the three-year course on top of the contribution from the City of Edinburgh Council; acknowledges the contribution of Leith FM and many others in promoting the campaign, and believes that teenagers such as Finola should be able to exercise choice concerning the further education that they receive without the need for such extensive fundraising.

Lodged on Tuesday, February 09, 2010; Closed
MSPs who supported the motion:

Scroll back to top